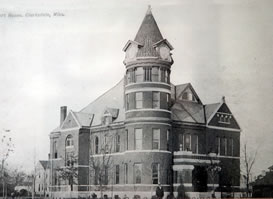 Coahoma County is located in the Mississippi Delta region of the state of Mississippi.  As of 2000, the population was 30,622. The county seat is Clarksdale.

Coahoma County was established February 9, 1836, and is located in the northwestern part of the state in the fertile Yazoo Delta region.  The name “Coahoma” is a Choctaw word meaning “red panther.”  The act creating the county defined its limits as follows:

Port Royal was once the county seat of Coahoma County.  It was a rival of Friars Point, five miles up the Mississippi River.  In the early days the county seats of the Mississippi River counties were always located on the banks of that stream.  When Port Royal was cut off from the river in 1848, its fate was sealed and the county seat of justice was located at Friars Point, which still remained a river town.  The latter place had a population of about 1,000 (census of 1920), and received its name in honor or Robert Friar, one of its earliest settlers.  Clarksdale, one of the county seats, is now the largest and most important city in the county, and had a population of 7,500 in 1920.  Clarksdale was named for John Clark, a brother-in-law of Governor James L. Alcorn, whose home, Eagles’s Nest was in this county.